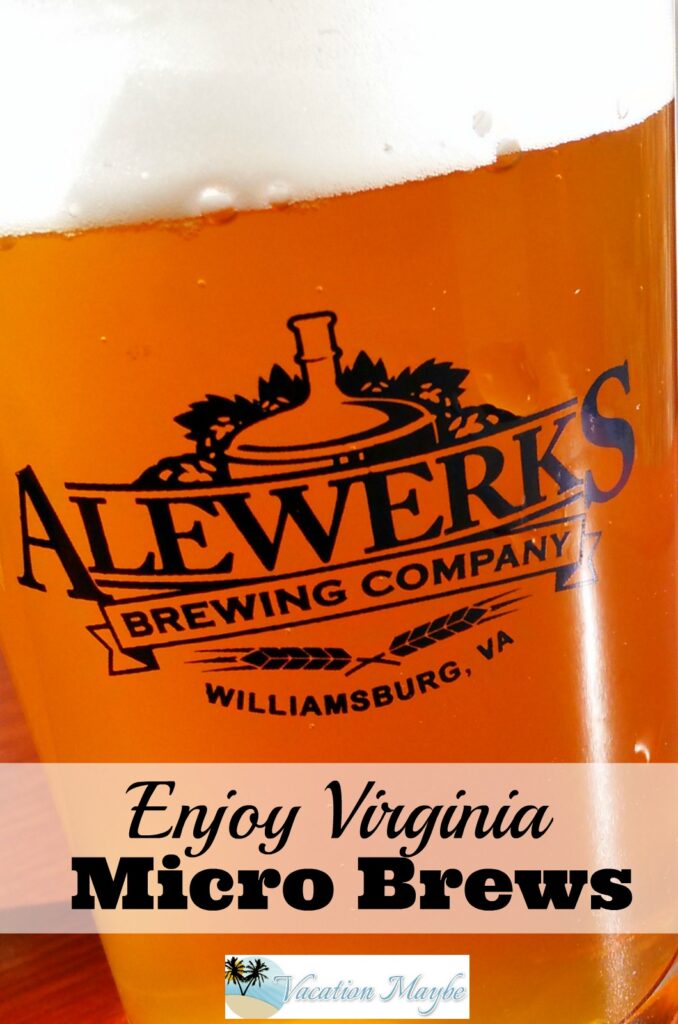 I love beer. Some people love to drink wine, some prefer fancy cocktails but my go to drink whether I am out on the town or just relaxing at home is a great beer. I am not talking Budweiser or Coors Light. In the fridge right now we have New Castle and Leinenkugel’s Snow Drift Vanilla Porter.  Yumm! Some have called me a beer snob and I will happily accept that label. Whenever we travel we seek out the local microbrewery and always pay them a visit. We were so happy to find the Alewerks Brewing Company not far from our campground in Williamsburg, VA.

While the list of beers on tap at any microbrewery is likely to change frequently  you can usually count on them having a few beers year round that have become well known and liked. Year round brews at Alewerks include the following:

Always have a DD – This goes with out saying but I am going to say it anyway – Drink responsibly.

Always buy a flight if available – What is a flight you ask? A flight is a sampling of beers. You usually get 2-4 oz of each of several beers. Some microbreweries group several brews together and have a set variety in the flight. Other places let you choose which beers you want to sample. Depending on the number of beers in the flight you may want to share it with someone so you can enjoy a full glass of your favorite. Otherwise drinking a flight may be all the alcohol you should drink.

Get a Growler – What is a growler? A growler is a glass bottle that holds 64 oz of beer. Once you won a growler you can get it refilled at most brew pubs or breweries. It is a great way to take home your favorite brews. We actually keep one in all of our vehicles so that if we should happen to be near a brewery we can get it filled up.  Growler refills can cost anywhere from $7 up to as much as $20.

Be prepared to hang out and relax – In my experience, breweries with tasting rooms or brew pubs are great places just to chill out relax and enjoy a beer. They sometimes have complimentary snack or local food trucks provide eats. They usually have board games or bar games. In general, the atmosphere is usually laid back.

We have visited breweries in almost every city we have visited from Brooklyn to North Carolina. So when you travel don’t forget to pack your growler or better yet keep one in the car because you never know where you will find a brew pub.

Other great places to enjoy a brew: