Things to Do in Oxford MS 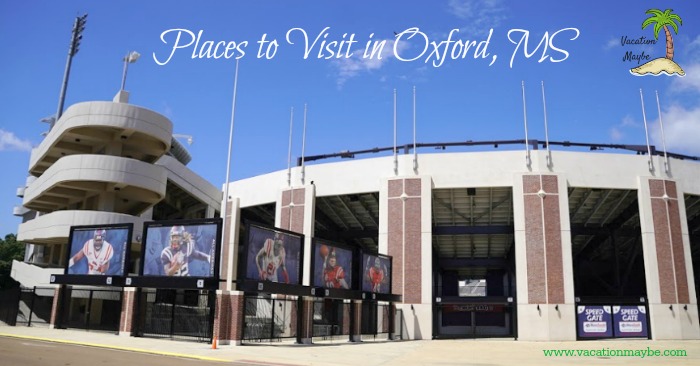 Oxford, Mississippi, famous for being the “Cultural Mecca of the South” will surprise you with all the exciting and interesting things to do with your family. It’s a charming city that is rich in history. It has a lot of acclaimed restaurants which you can check out the ones we tried in my post Places to Eat in Oxford MS. It’s the home of Ole Miss, fascinating shops and more. My family and I had so much fun, and one thing’s for sure Oxford will always have a place in our hearts for our memorable trip. See my list of things to do in Oxford MS that you should list down in your itinerary for your trip to this captivating city.

Best Things to Do in Oxford MS

On our walking tour which I suggest you take, you can arrange one at VisitOxfordMs.com or email info@historich.com we had the pleasure of being hosted by the owner Rhondayln Peairs. She is a native to the area, and although she has lived in other places, she returned to the place she loves. She is very knowledgeable about local history and how Oxford fits into national history. The Historic Tour of Oxford Square we took lasted about an hour. They have several themes available and in the state there are theme tours noteable: The Country Music Tour, Blues Tour, Literary tour and the Freedom Tour.

The ten cool things I learned about Oxford while on the walking tour in no particular order because history isn’t to be ranked or ordered it is to grow and learn from and to share and be a part.

Square Books – They host over 150 author events per year and has many signed and collectible books, a very strong literary fiction section, southern fiction and history. The second floor of Square Books has a coffee bar so browsers can enjoy a cup and, when the weather is fair, relax on the balcony overlooking the courthouse. We were impressed with their extensive collection of books by writers that are from Mississippi.

Square Books Jr.– The kids’ book store is filled with everything a child could want. They host book readings and it a must-stop if you have children.

Off Square Books – Is a bookstore with a cool vibe. They all Thacker productions to host a radio production in their store that not only interviews authors but it features live music they have a house band and visiting artists. It is a well-attended event that merges the poetry of music with literature.

9. William Faulkner statue in front of City Hall makes sense because he was a resident of Oxford for 40 years. He also had a movie Intruder In The Dust  filmed in the square on the steps.

10. Oxford has several unique stores in their square. There is a record store and it is all vinyls, The End of All Music Record Store.

Visit End of All Music Record Store at 103A Courthouse Square Oxford MS, 38655

We also got to look into the window of Neilson’s Department Store. It has been a fixture of the community since 1839. The owner was smart enough to hide gold so when his business was burnt down during the civil war he was able to rebuild.

Southside Art Gallery – Was established in the early 1990’s. They promote art in their community. They are a commercial art gallery that is open to the public and features a variety of artists.

The Grove is the tailgating area located at the center of the University of Mississippi campus. It is approximately 10 acres in size.

We took the opportunity to drive and meander through Mississippi University. The campus is stunning. It is the kind of place you could picture yourself at. I could see myself in The Grove reading a book or tailgating with friends. I have a hard time saying this, but I wouldn’t be upset if my children wanted to attend Ole Miss. They just can’t root for them when they play the Gators. Ole Miss is a wonderful University with opportunities abound. They are also listed as the 5th safest campuses.

Rowan Oak was the home of American writer and Nobel Prize laureate William Faulkner and his family for over 40 years. It was originally built in 1844, and stands on over 29 acres of land just south of the Square in Oxford, MS.

The home of William Faulkner sits among gorgeous trees it was built in 1844. This was their family home for 40 years. If you wish to visit one of the greatest writers home of the first century it will cost you just $5.

You will enter into his home on a self-guided tour. You can ask the docents questions as they arise. The museum features easy to read descriptions and some interactive materials to bring the Faulkner house alive. The home should be some place you visit. I was so impressed and embarrassed that I had never read on his books that I ordered one from the library prior to departing.

I never would have thought to head to Mississippi on vacation but it looks like a very educational and exciting trip.

Definitely will consider these if I ever head that way. Thanks.

Southern architecture is so interesting, I wish we had more of it in the Midwest!

I went to England recently, this post makes me wish I would have seen Oxford Univerity up close!

I like the Southside art gallery, we really should appreciate our artists more. Thanks for sharing iconic places like this!

I love visiting museums, they’re treasures of the past we should never forget.

The thought that the building I was walking in was built by child labor is haunting… I suppose I should feel that when I wear cheap clothing though. Thanks for bringing this situation into the light.

I wish I had more bookstores in my community!

I might do some research on Princess Hoka, she sounds very interesting.

The front of Neilson’s Department Store is breathtaking. It’s little architectural details like that that really make a town shine.

Never though about visiting Mississippi

Oxford, MS sounds like a wonderful place to visit with my family. Besides all the great shops and restaurants, it sounds like a city rich with culture and history.

This give me a new view of Mississippi

what a pretty town

I didn’t know they had anything there. Would be a interesting road trip

America is the best all around

great tips thanks, ill keep them in mind

The museum sounds like a place I would love to visit!

Would love to visit the vinyl record store! I’m from Mississippi, so I’m an Ole Miss fan!

looks like a town straight from a history textbook

This looks like a great place to vacation. I could use some relaxation!

This is so fascinating to me. I know I would love it!

Oxford seems like a awesome place to visit someday. A lot of these sites sound like they would be really enjoyable to explore on vacation.