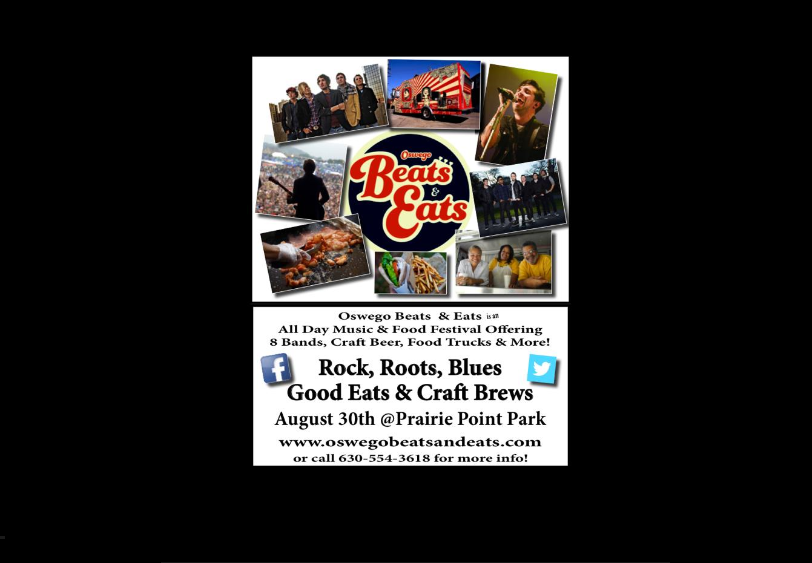 Building on a successful first year, the festival is expanding into the food scene. This year the event will host Food Network Host, Ben Vaughn. FYI Network Culinary Personality, World Food Championship Host and Author of Southern Routes. He will be providing tastings to the VIP tent and presenting our best vendor with a Golden ticket to the World Food Championship.

Since the event benefits the community, the proceeds will go to several charities. Worthy causes that will benefit from the funds raised include  Chicago Bears Care and the Kendall County Food Pantry. Proceeds will also fund The Beat and Eats Culinary/Musician Scholarship.

2014 Oswego Beats and Eats performers include:

Saints of Valory- a national touring band that have opened for AWOLNATION at Taste of Chicago and touring this summer with O.A.R. and Phillip Phillips.

Green River Ordinance- Command a huge presence throughout the South and Midwest.

Barcelona- Currently on a nationwide tour opening for The Fray.

Nelo- Hails from Austin with a soulful sound you can definitely groove to.

Marina City- Hail from Plainfield and packing all the fun and energy they brought last year and we are so excited they are returning.

Vintage Blue- Local Chicago band pumping out great rock-n-roll with all they’ve got.

These Wild Plains- Boston area band on the rise. These guys have a great sound and bring a great vibe for movin’ and groovin’.

Shirley King- Daughter of the Blues (BB Kings daughter), she will be bringing the house down.

The Novel Ideas- Country Folk Band that brings a soulful groove to the stage.

Oswego Beats and Eats will be held on August 30 at Prairie Point Park in Oswego Illinois. Gates open at 11:30 am and re-entry is allowed. Chairs and blankets are allowed for seating, but no tents will be allowed. Food and alcohol is available for purchase and a ATM will be available on the premises. The event will be held rain or shine.

Tickets are currently available for pre-sale. Tickets are $10 during pre-sale or $15 after July 31. Children ages 12 and under are free.

For more information on the event or to purchase tickets, please visit www.oswegobeatsandeats.com.