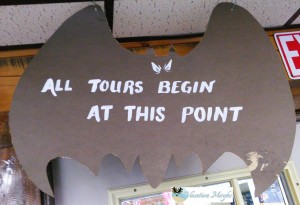 Lincoln Caverns is located in Huntingdon, PA, not far from the PA Turnpike or Interstate 80. The caverns are open for tours on weekends in December from 9A – 4P. The caverns are also open March through November. Tickets can be purchased online or at the door. Tickets are reasonably priced, only $13.98 for adults and $7.98 for children under 12. You actually tour two caverns, the Lincoln Caverns and Whisper Rocks. The tour is about an hour long. 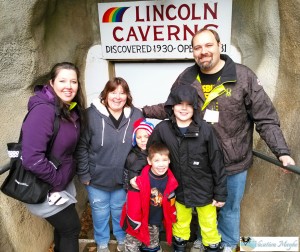 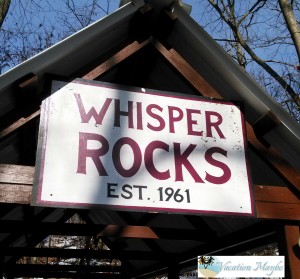 Bacon, marshmallows, popcorn, grapes, pork chops, root beer floats? What do all these foods have in common? They are all types or names of cave formations in the caverns. It was very interesting to learn how many of these formations were formed. Many caves name the formations found in the cave based on what they look like. My kids loved the stack of pork chops and root beer float shaped formations.

These caves also have the largest active flow stone formation on the East Coast, called Frozen Niagara. I have visited many caves along the East Coast and I was very impressed with the wide variety of types of formations. Some I had never seen before. You will see plenty of well known formations including stalactites, stalagmites, and drapes. 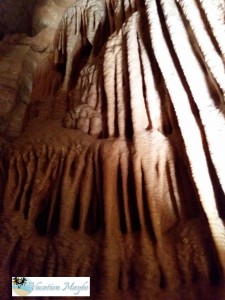 One of the most beautiful parts of the caverns was the rocks that sparkled because they were formed of dried hardened calcite. It was really hard to capture the sparkling rocks but you can see a few of them in this picture. 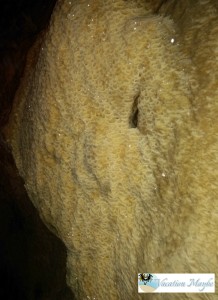 Another interesting fact I learned is that you can judge the purity of the calcite formations based on how white they are. 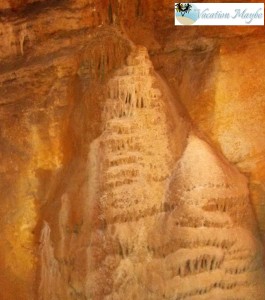 I hope you will plan a trip to visit caverns or caves near you. You will surely learn a lot and experience some of nature’s hidden beauty.

Interested in other caves? Learn about the Twin Caves in Spring Mill State Park in Indiana.