Have a Vacation Full of Fun with these Michigan Travel Ideas 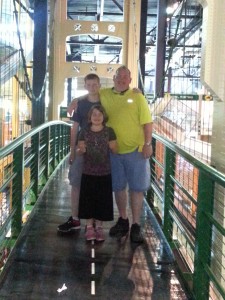 Detroit Institute of Arts– The DIA has been around since 1885 and after a move and several expansions, it now houses more than 100 galleries and takes up 658,000 square feet. The art collection owned by the DIA is among the top 6 art collections in the United States. The DIA features traveling art exhibitions on top of its own art collection. If you are visiting during the summer, you can take advantage of Friday Film Nights and Saturday Animation Clubs. Traveling with kids can be a chore but you can schedule a Family Tour, to help make your visit more enjoyable.

Henry Ford – Made up of 5 attractions, the Henry Ford is a great place to visit with family and will keep kids entertained as well as adults. Henry Ford is made up of Greenfield Village, Henry Ford Museum, Ford Rouge River Factory Tour, Benson Ford Research Center, and IMAX Theater.  Greenfield Village transports visitors back in time to years gone by. Actors and Actresses amp up the experience by dressing and acting in character all thru out the 90 acres. Watch special IMAX movies or catch the latest new release on the big screen at Henry Ford’s own IMAX Theater, complete with concessions.

Detroit Historical Museum– Detroit has a rich history and the Historical Museum dates back to 1928. The current museum opened in 2012 at the Detroit Cultural Center and features a number of new exhibits. The original exhibits have been updated and you will even find special exhibitions featuring works from around the community.

Cranbrook Academy of Art and Science Museum – Cranbrook contains the Science Museum as well as an Art Museum. It is also home to a Pre-K – 12 College Prepatory School, House and Gardens, and an Academy of Art. The museums are smaller than the ones you will find downtown but the collections and exhibits are in a class of their own. The Science Center also includes a planetarium and bat house.

Holocaust Memorial Center-This center ,located in Farmington Hills, MI, is the first free standing Holocaust Center. The Memorial Center has been operating for over 25 years providing visitors with a detailed look in the Holocaust. It show cases a Time Line in the circular exhibit room upon entering the museum. The Time Line tracks the history of the Jewish people for over 4,000 years of history. After touring the museum you can check out the Multi-Lingual library on the 2nd floor.

Motown Historical Museum– Founded in 1985 by Esther Gordy Edwards,this museum features “Studio A”. Visitors can’t wait to stand in the infamous studio where so many of their favorite artists and groups recorded. It houses an exclusive and extensive collection of Motown artifacts,memorabilia, and photographs. The museum was created as a place to preserve the legacy of Motown Record Company and educate people about its history.

Arab American National Museum-Here you will find information on the history, culture and contributions that Arab Americans have made. The first floor, Community Courtyard begins with Arab American Heritage and continues on the 2nd Floor of the Museum with 3 permanent galleries. It also hosts traveling exhibits which change a few times during the year.

Dossin Great Lakes Museum– Owned by the Detroit Historical Society, this museum is dedicated to showcasing the story of the Great Lakes. It places a special focus on the role Detroit played in regional and maritime history. The 16,000 square foot museum features over 300 years of history and shows how the Great Lakes and the Detroit River played an important part.